National Institution Center of Culture “Prlicev” – Ohrid as organizer and unavoidable factor of cultural life in Ohrid and its surroundings, has successfully developed numerous cultural events that animate the citizens and especially the young generation.
Read more…

The House of Robev Familyis a famous and historic building in Ohrid, Macedonia. It was built in its current state in 1863–1864 by Todor Petkov from a village Gari near Debar. Today the house is a protected cultural monument and belongs to the Institute for Protection of Cultural Monuments and National Museum.
Find out more… 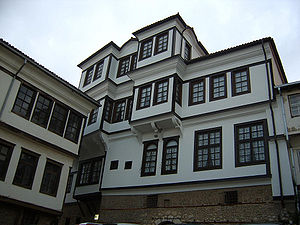 Bay of the Bones Museum

Ohrid was enriched with another cultural and historical landmark as well as with a tourist attraction – Museum on Water – an exceptional archaeological complex, which is one of a kind in the region.
Read more…

Plaošnik or simply Plaoš is an archaeological site and holy place in Ohrid, 250 meters below Samuil’s Fortress. In the future, the whole complex will have konaks (mansions) as in the time of Saint Clement of Ohrid, together with several surrounding objects.
View on Google Maps

Saint John the Theologian, Kaneo or simply Saint John at Kaneo is a Macedonian Orthodox church situated on the cliff over Kaneo Beach overlooking Lake Ohrid in the city of Ohrid, Republic of Macedonia. The church is dedicated to John of Patmos, the writer of Revelation, who is also considered to be the same person as John the Apostle.
View on Google Maps

The Church of St. Sophia is located in the city of Ohrid, Republic of Macedonia. The church is one of the most important monuments of Macedonia, housing architecture and art from the Middle Ages. The church was built during the First Bulgarian Empire, after the official conversion to Christianity.
View on Google Maps

Church Uspenie Na Presveta Bogorodica Kamensko is a Macedonian Orthodox Christian church temple in the town of Ohrid. This church is located in the center of Ohrid, in the old part of the city above the Star Cinar tree and fountain in the bazaar. Inside the church is the tomb of Debar-Kicevo Metropolitan Anthony.

St. Erasmus is a cave church near Ohrid, Macedonia. This church is dedicated to the archbishop Erasmus and it is located about three kilometers from Ohrid, in the rocks, right from the road leading from Ohrid to Struga.

On the slopes of the hill “Olmec” is the monastery St. Petka. In the middle part of the exterior of the five-sided apse, the following inscription is written: “Saint Petka”. The monastery Sveta Petka is positioned in the village of Velgosti. The monastic church is single-nave basilica with two domes.

The Monastery of Saint Naum is an Eastern Orthodox monastery in the Republic of Macedonia, named after the medieval Saint Naum who founded it. It is situated along Lake Ohrid, 29 kilometres south of the city of Ohrid. The Lake Ohrid area, including St Naum, is one of the most popular tourist destinations in Macedonia.

The Monastery of Saint Jovan Bigorski is a Macedonian Orthodox monastery located in the western part of Macedonia, near the road connecting the towns of Debar and Gostivar. The monastery church is dedicated to St. John the Baptist. According to the monastery’s 1833 chronicle, it was built in 1020 by Ivan I Debranin.